Watertown, Massachusetts, October 2, 2016 – Walk of Life, the fifth annual walkathon of the Armenian Bone Marrow Donor Registry (ABMDR) in New England, garnered enthusiastic community support, as more than 200 took part in the highly anticipated event. Held on September 24 in Watertown, the walk drew numerous community organizations and a large number of young people, including students from local schools and universities.

The walkathon kicked off with an opening ceremony at ACEC. Following the blessing of the event by clergy, ABMDR president Dr. Frieda Jordan welcomed the participants and said, “It is so wonderful to see all of you gathered here today, in support of our organization’s life-saving mission. I would like to thank the Walk of Life Committee for having done such a great job; I would like to thank our generous and dedicated sponsors for helping make this event possible; and I convey our heartfelt gratitude to you, the New England community, for your spirited involvement and activism.”

Also delivering remarks was Watertown Councilor at Large Michael Dattoli, who praised the walkathon and the walkers for their commitment to this worthy cause. Dattoli went on to encourage walkers to support the businesses that sponsor the walk in order to increase the scope of sponsorship in Watertown. The walk started after the ribbon-cutting ceremony, headed by Dr. Jordan.

The 2.2-mile walk concluded at Watertown Square, where participants enjoyed great music, dancing, and food, along with thousands of people attending the annual Faire on the Square festival. On the occasion of the fifth anniversary of the New England walk, the Walk of Life Committee had provided celebratory cupcakes, donated by Peggy Hovanessian; and pizza, donated by Domino’s of Watertown.

During the closing ceremony, Tamar Minassian Melkonian of the Walk of Life Committee said, “We’re so touched that this year, on our fifth anniversary, we again see many community organizations and individuals that have come together to participate in and collaborate for this walkathon. We couldn’t do this without you!”

Next Minassian Melkonian presented a fifth-anniversary Certificate of Appreciation to the walk marshals, who represent the Armenian Business Network (ABN), led by Jack Antounian. “We would like to make a special acknowledgement of thanks to a group that has safely guided us each year during our walkathon,” Minassian Melkonian said and added, “Thank you, ABN, for your teamwork and continuing this tradition year after year!”

Minassian Melkonian also thanked the organizers and sponsors, emphasizing the extraordinary grassroots and youth support which the walkathon had garnered. “With your generous support, we have raised over $17,000 today,” she said. “We’re especially happy to see a growing number of students among us, ranging from the elementary-school level all the way to universities across the state. Specifically, we’d like to welcome the Armenian Student Associations representing several universities including Harvard, Northeastern, Tufts, and Massachusetts College of Pharmacy, as well as the high-school Armenian clubs, for their efforts and commitment.”

Subsequently Minassian Melkonian announced this year’s walkathon winners. The Armenian Students Association (ASA) was recognized as the team to have raised the most funds; for the third year, Nairi Krafian won for having individually raised the most funds; and the Amaras Art Alliance and St. James (ACYOA and Erebuni Saturday School) teams tied for highest number of participants.

For the fourth consecutive year, the Armenian Tree Project will plant commemorative trees in Armenia in honor of the walkathon winners, as part of the #LivingCentury Initiative. “This meaningful gesture appropriately symbolizes the ‘gift of life’ which our cause represents,” Minassian Melkonian said. 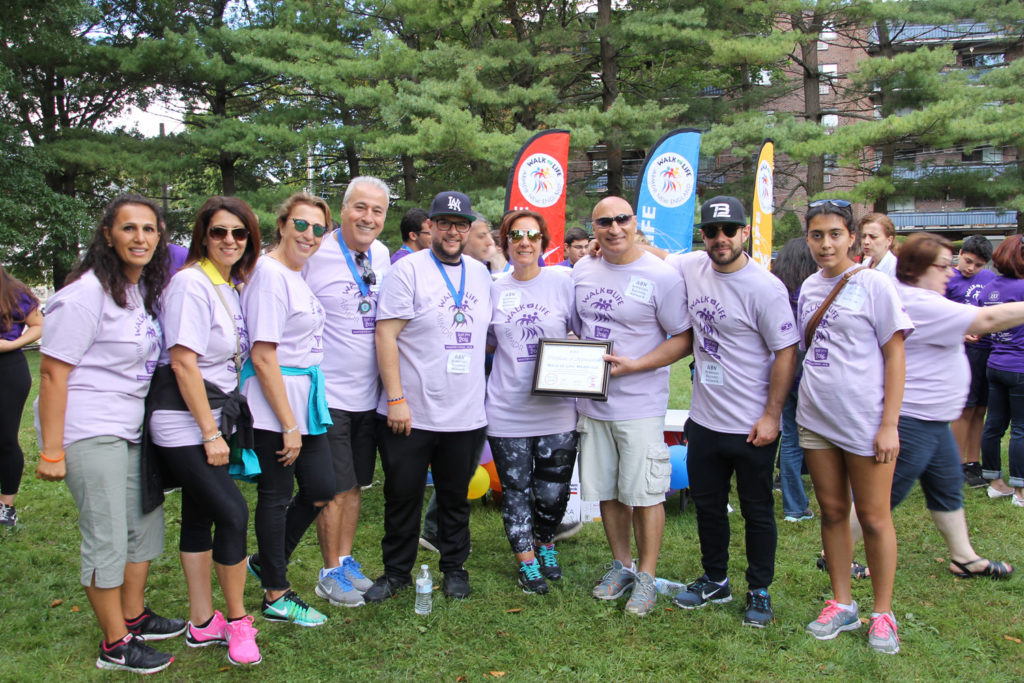 The Walk Marshals (Armenian Business Network Team), who received a Certificate of Appreciation for five years of dedicated service. 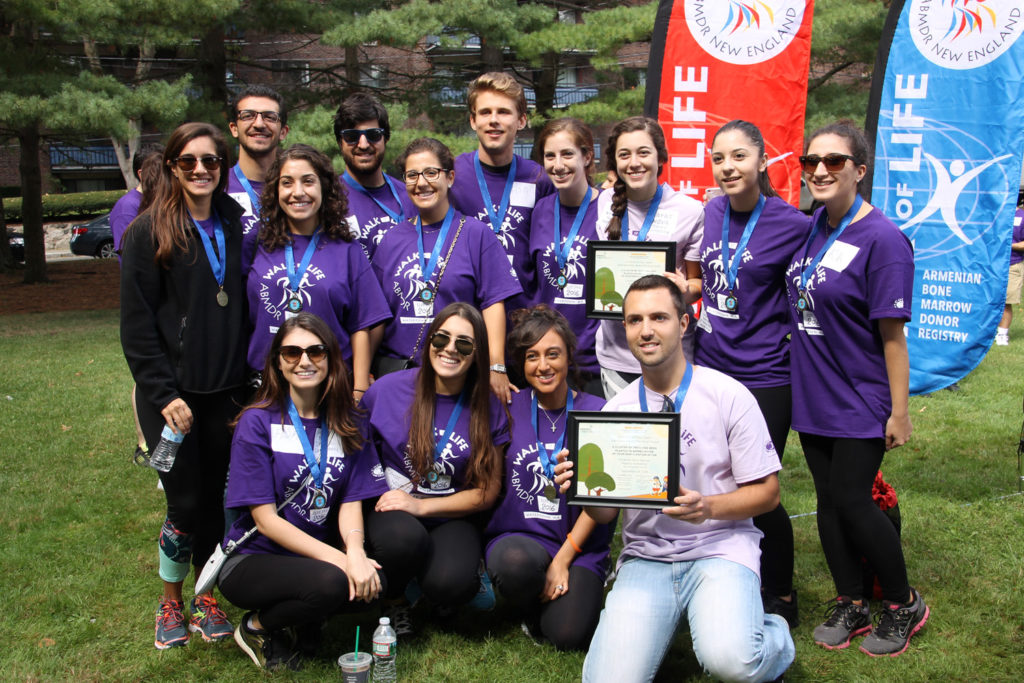 The Armenian Student Association Team raised the most funds. 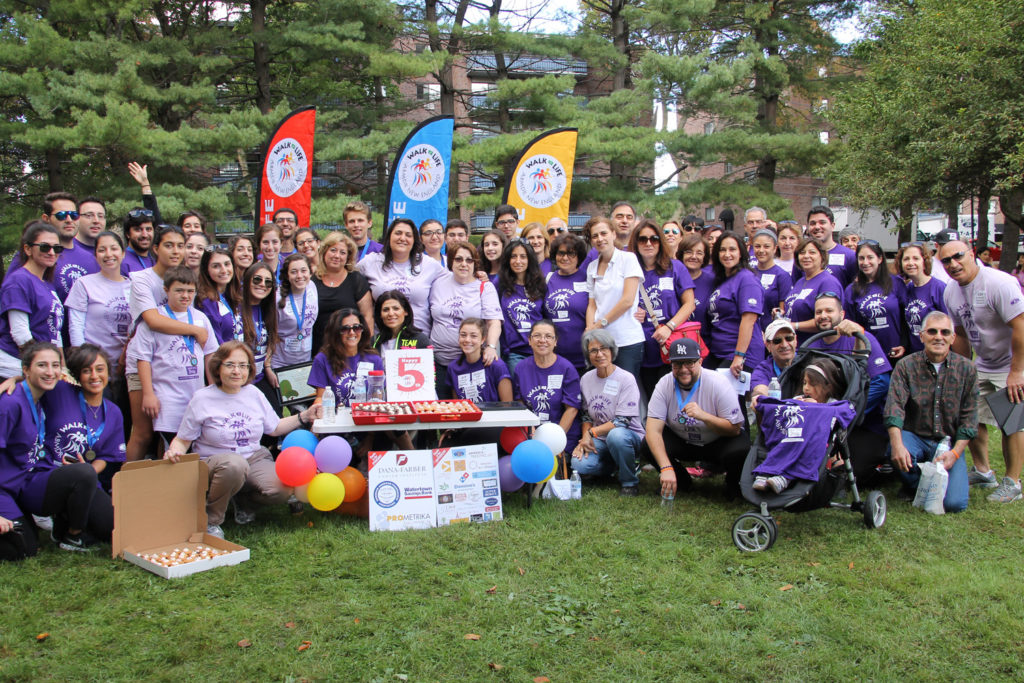 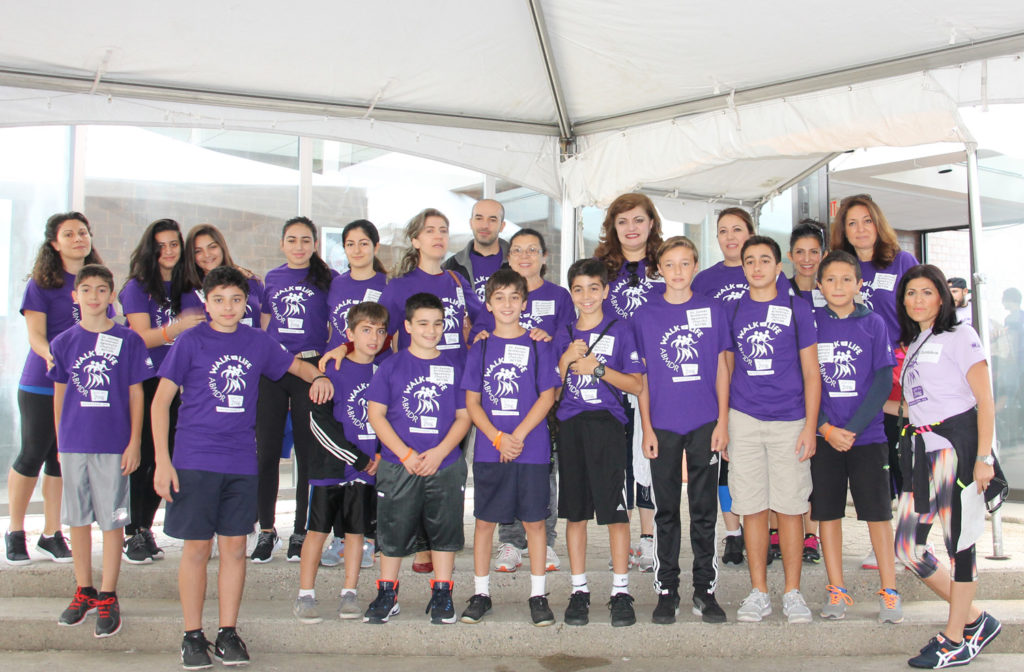 The St. James ACYOA/Saturday School Team, which shared the award for the largest walk team with Team Amaras. 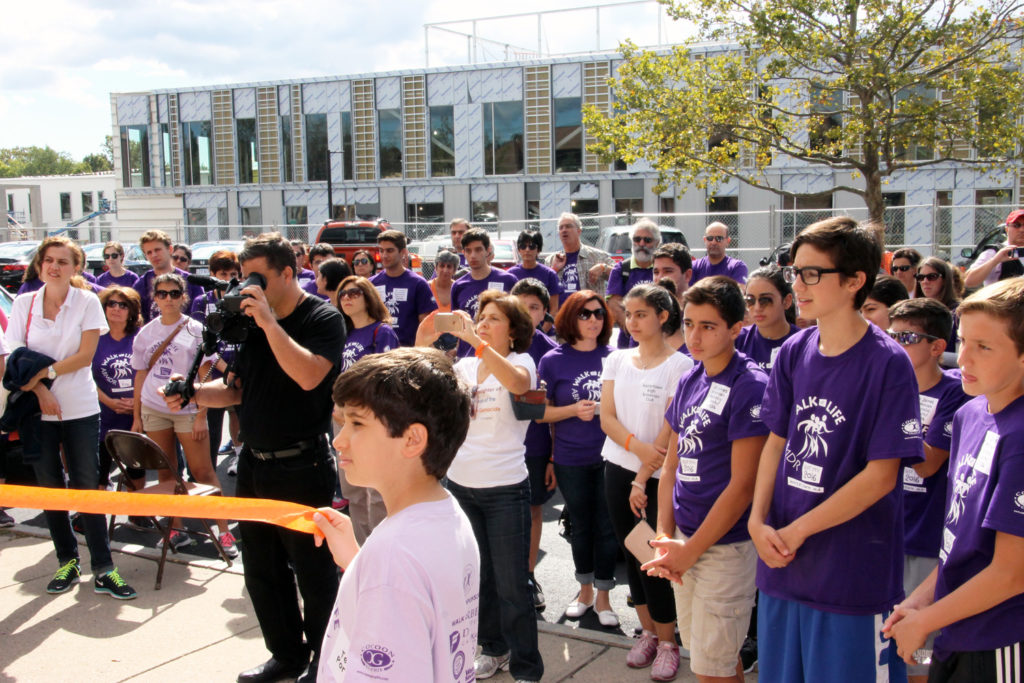 A scene from the opening ceremony. 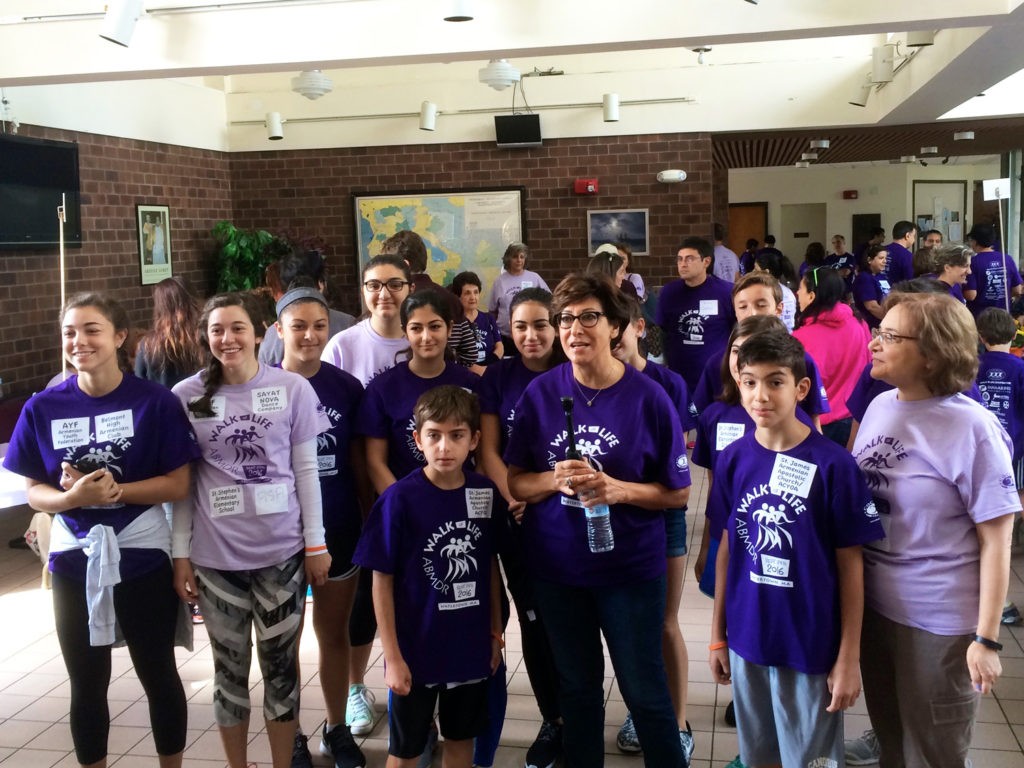 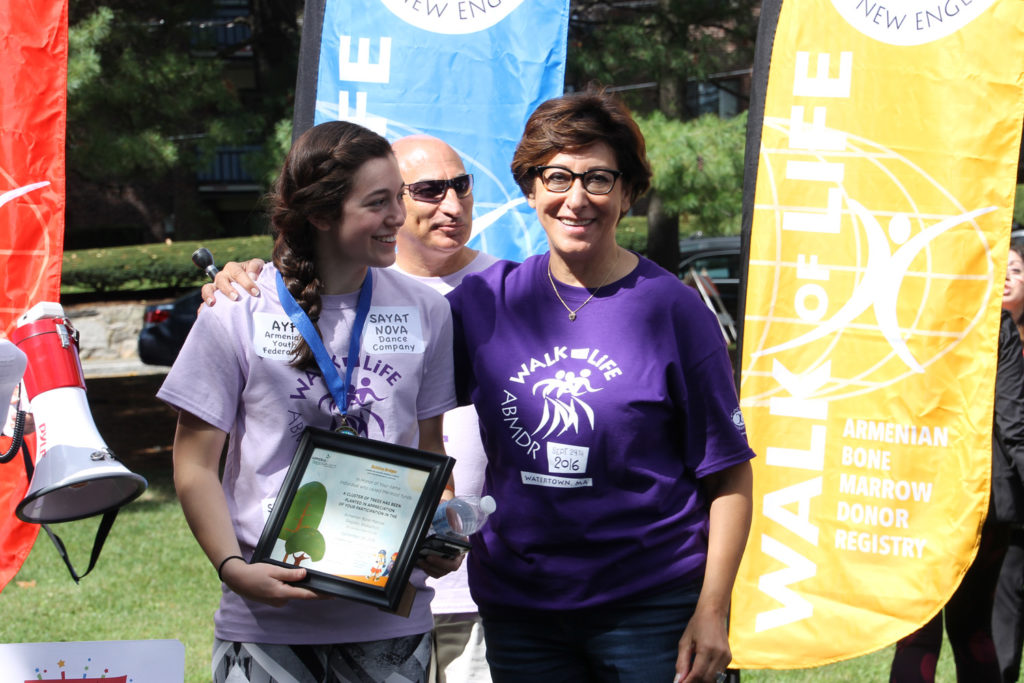 Nairi Krafian, who raised the most funds as an individual walk participant; Jack Antounian; and Dr. Frieda Jordan. 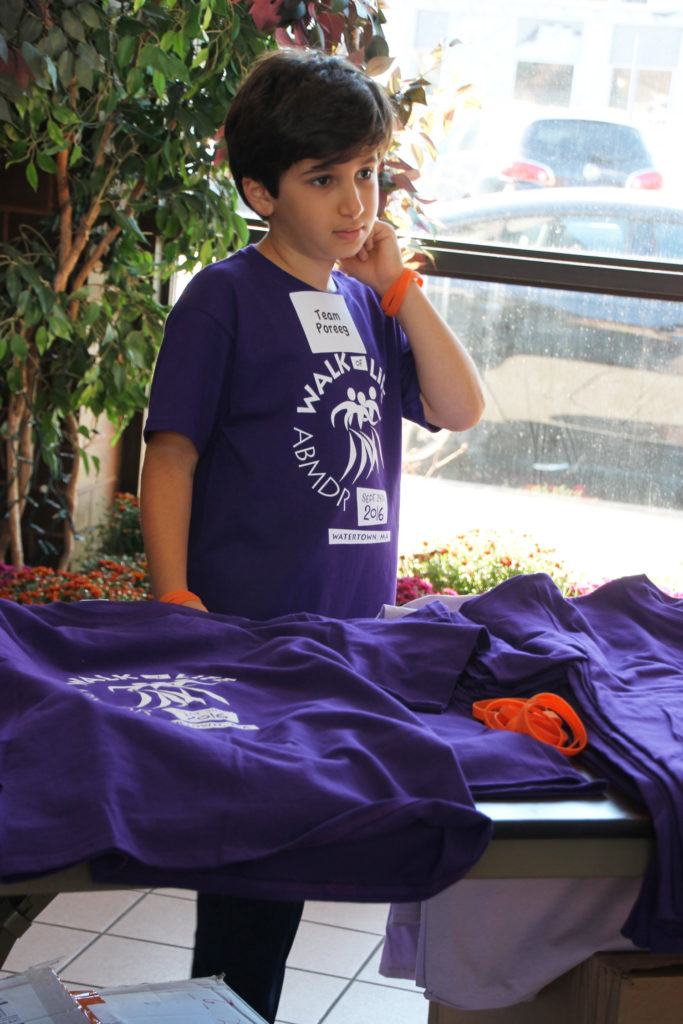 The youngest volunteer, Zareh Dechkounian, has participated in all five walkathons.

About the Armenian Bone Marrow Donor Registry: Established in 1999, ABMDR, a nonprofit organization, helps Armenians and non-Armenians worldwide survive life-threatening blood-related illnesses by recruiting and matching donors to those requiring bone marrow stem cell transplants. To date, the registry has recruited over 28,000 donors in 42 countries across four continents, identified over 4,200 patients, and facilitated 27 bone marrow transplants. For more information, call (323) 663-3609 or visit abmdr.am.