as 28th Congressional District Woman of the Year

Los Angeles, March 21, 2016 — On March 15, Dr. Frieda Jordan, president of the Armenian Bone Marrow Donor Registry, was honored in the US Congress by being named the 28th Congressional District Woman of the Year. The honor was bestowed on Dr. Jordan by Congressman Adam Schiff, who represents California’s 28th Congressional District, in a speech he delivered on the floor of the House of Representatives. Rep. Schiff’s tribute was entered into the Congressional Record.

Rep. Schiff presented Dr. Jordan with a plaque featuring the text of his tribute to her, at a luncheon held on March 18 in Echo Park. During the event, which was organized on the occasion of Women’s History Month, Rep. Schiff honored a group of outstanding women, including Dr. Jordan, from communities in the 28th Congressional District.

“I rise today in honor of Women’s History Month,” Schiff said in his remarks at the House of Representatives on March 15. “Each year, we pay special tribute to the contributions and sacrifices made by our nation’s women. It is an honor to pay homage to outstanding women who are making a difference in my Congressional District. I would like to recognize a remarkable woman, Dr. Frieda Jordan, of Glendale, California.”

Commenting on the Congressional tribute, Dr. Jordan said, “I am absolutely humbled by this prestigious honor. I convey my deep gratitude to Congressman Adam Schiff, who is an extraordinary, longtime supporter and advocate of the Armenian Bone Marrow Donor Registry, as well as the House of Representatives as a whole, for selecting me as the 28th Congressional District Woman of the Year.”

Dr. Jordan holds a BSc and a Ph.D. in Biochemistry from King’s College London and is a Certified Histocompatibility Specialist with the American Board of Histocompatibility and Immunogenetics. In 1999, she co-founded the Armenian Bone Marrow Donor Registry, which she has since served as its president.

Dr. Jordan is an active member and participant of various medical organizations including the World Marrow Donor Association, the National Marrow Donor Program, the European Federation for Immunogenetics, and the Armenian Medical Association. Dr. Jordan has made presentations at numerous conferences and workshops in the United States and around the world.

About the Armenian Bone Marrow Donor Registry: Established in 1999, ABMDR, a nonprofit organization, helps Armenians and non-Armenians worldwide survive life-threatening blood-related illnesses by recruiting and matching donors to those requiring bone marrow stem cell transplants. To date, the registry has recruited over 28,000 donors in 28 countries across four continents, identified over 3,500 patients, and facilitated 26 bone marrow transplants. For more information, call (323) 663-3609 or visit abmdr.am. 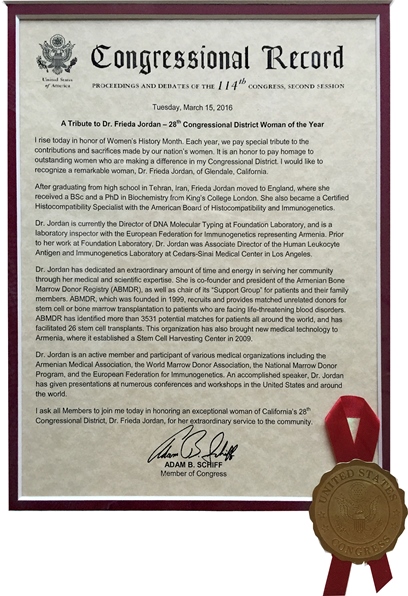